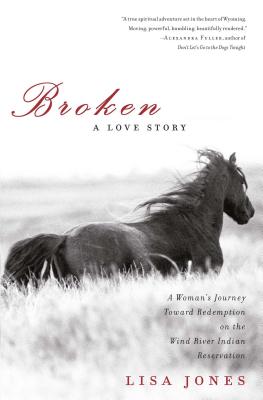 Writer Lisa Jones went to Wyoming for a four-day magazine assignment. She was committed to a long-term relationship, building a career, and searching for something she could not name.

At a dusty corral on the Wind River Indian Reservation, she met Stanford Addison, a Northern Arapaho who seemed to transform everything around him. He gentled horses rather than breaking them. It was said he could heal people of everything from cancer to bipolar disorder. He did all this from a wheelchair; he had been a quadriplegic for more than twenty years.

Intrigued, Lisa sat at Stanford’s kitchen table and watched. And she listened to his story. Stanford spent his teenage years busting broncos, seducing girls, and dealing drugs. At twenty, he left the house for another night of partying. By morning, a violent accident had robbed him of his physical prowess and left in its place unwelcome spiritual powers—an exchange so shocking that Stanford spent several years trying to kill himself. Eventually he surrendered to his new life and mysterious gifts. Over the years Lisa was a frequent visitor to Stanford’s place, the reservation and its people worked on her, exposing and healing the places where she, too, was broken. This is her story, intertwined with Stanford’s, and it explores powerful spirits, material poverty, spiritual wealth, friendship, violence, confusion, death, and above all else, love.

Lisa Jones lives in Colorado with her husband and two cats. She has written for The New York Times Magazine, High Country News, and National Public Radio. BROKEN is her first book.

~ (Usually) Meeting the first Saturday of the month at 3 pm ~