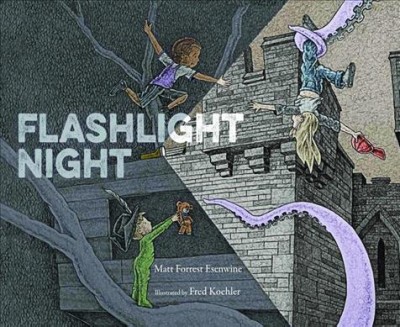 Join us in The Gallery

Flashlight Night is an ode to the power of imagination and the wonder of books.

Three children use a flashlight to light a path around their backyard at night; in the flashlight's beam another world looms.

Our heroes encounter spooky woods, a fearsome tiger, a time-forgotten tomb, an Egyptian god, a sword-fighting pirate, and a giant squid. With ingenuity, they vanquish all, then return to their tree house--braver, closer, and wiser than before--to read the books that inspired their adventure.

The Horn Book Magazine's review sums this book up nicely.

"It’s an-old fashioned, rip-roaring imaginary adventure, complete with a pirate, an ancient Egyptian chamber, and traveling to a 'foreign shore.' At the end, the kids are shown huddled around a book, reading with a flashlight, and the old-timeyness of the story is echoed by the stack of Jules Verne and Robert Louis Stevenson titles beside them."

Author Matt Forrest Esenwine lives with his family in Warner, New Hampshire. His poetry has been published in Highlights® as well as in anthologies selected by Lee Bennett Hopkins, Carol-Ann Hoyte, and J. Patrick Lewis.  Artist Fred Koehler won a Boston Globe/Horn Book Honor Award for his illustrations for One Day, The End. He is the author-illustrator of How To Cheer Up Dad, which received three starred reviews, and he is the illustrator of This Book Is Not About Dragons and Puppy, Puppy, Puppy. He lives with his children in Lakeland, Florida.