Join in Planning Some 2020 Events! 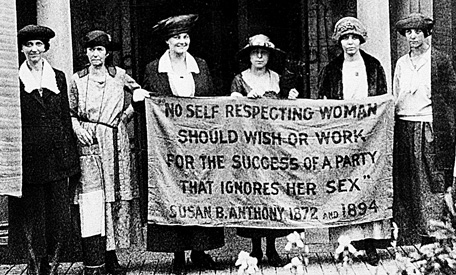 The 19th Amendment to the U.S. Constitution granted American women the right to vote, a right known as women’s suffrage, and was ratified on August 18, 1920, ending almost a century of protest. In 1848 the movement for women’s rights launched on a national level with the Seneca Falls Convention organized by Elizabeth Cady Stanton and Lucretia Mott. Following the convention, the demand for the vote became a centerpiece of the women’s rights movement. Stanton and Mott, along with Susan B. Anthony and other activists, raised public awareness and lobbied the government to grant voting rights to women. After a lengthy battle, these groups finally emerged victorious with the passage of the 19th Amendment.

Let's find some ways to commemorate next year’s 100th anniversary of women’s right to vote.

We hope you will join us in the

Gallery at MainStreet BookEnds in Warner

for a discussion as to how we might celebrate this important anniversary throughout the year of 2020.

Hope to see you there!

Why They Marched: Untold Stories of the Women Who Fought for the Right to Vote (Hardcover)

When You Grow Up to Vote: How Our Government Works for You (Hardcover)